As we left our hero in the last blog......
Steve had his rhinectomy and was recovering.  On St. Patrick's Day, 1999, up at UCLA Oral Surgery Department I got my dental implants for the t-bar posts so the new prosthesis could clip onto it.  The implants were inside the nasal base which had a wonderful "floor" created by using a skin graft from the rhinectomy surgery. The skin graft was almost as bad as, if not worse than, the rhinectomy surgery itself!  It was a nasty and painful recovery...and I had a big patch on my right thigh.  The doctors had determined that while I had had 32 radiation treatments at Hoag Memorial several years earlier, the bone was strong enough and not damaged by the radiation to support the implants.  Yay!  This was a blessing. The implants took a few months...maybe 6..to fully take to the bone and be secure enough for the posts to be attached and the prosthesis clipped to.  It seems like this whole prosthetic procedure took forever..I just wanted a nose that I didn't have to glue on!  It was worth the wait, believe me!
In the meantime...after the implant surgery had taken place, Dr. Roumanis called me one day and asked if I would like to be part of an article being done on her for PEOPLE magazine!  I was her newest patient for a facial prosthetic..and had the best attitude, she said.  "Wow...PEOPLE magazine!" Arrangements were made and the reporter/interviewer came to my apartment in Long Beach to interview me one day. Then a photography session was set up a couple of weeks later.  One photo session was at the maxillofacial office at UCLA and the other session was at the house of my vocal coach in Hollywood I had used prior to the surgery--this was done to show that my life was moving on, even after such a radical surgery!  It seemed like months later, but in July of 1999 the article appeared!  "Hope Restored" was the name of the article about Dr, Roumanis and which feature myself and a lady who was her first patient at UCLA who had lost an eye and palate. It was quite an article...and talk show personalities Rick and Brian even mentioned me on their show the day after the magazine came out!  Wow!  I was a celebrity...for a few days!  The cover of the magazine was Cindy Crawford as she had just given birth to her son. Being part of the article was fun..but it also told my story with the rhinectomy and maxillofacial work..ready or not!
In November of 1999..just in time for the holidays..I got my first 2 prostheses that could utilize the clips and t-bar....and NO glue!  What a gift that was for me!  I was still shy about going out into public quite a bit...but I really had no reason to be....as people had no idea, by looking at me, what an ordeal I had been through!  Life-changing.  Life-saving.
I wrote an article for a cancer group out of Philadelphia. I believe they published it on their website and AOL somehow got hold of the article by me, as well...and I had included my email address in the article...so I started getting emails from people, literally, around the world who had either gone through a rhinectomy or had a family member or friend who had gone through such a surgery..or was getting ready to have the surgery.  While some of the subjects of the emails had passed on...many were still alive and I am still in touch with to this day.  One is a gentleman from Australia, Bruce, who I had the pleasure of meeting last year while he and his partner were on holiday here on the West Coast.  He's had his challenges, for sure, but he's doing well and working and enjoying this precious thing we all take for granted too easily. Another person I hear from, due to the article, is a lady from Scotland whose husband had the same cancer and surgery.  Sadly...he didn't make it much longer after his surgery.  I was devastated getting her email telling me this...she was upfront and honest.  This surgery-- and the repercussions, sunk in at that moment, realizing how it saved my life...it might save others...but it might not save others.  The lady from Scotland, Eileen, and I are still friends..we have yet to meet..but we've talked by phone and are friends on Facebook.  Another man, John,  lives in Connecticut.  His wife, Pam, keeps in touch with me, updating me with his progress.  We send Christmas cards to each other and email photos.  It's developed into a very nice friendship...another shoulder if needed...and a friend.  I'm always happy to receive emails and all from those facing this challenge.  No one wants to lose a body part...especially a nose, but I'm here to talk, to listen, and to give my thoughts, etc.
Backing up to my head-and-neck surgeon at UCLA...he told me during my initial exam with him, if I didn't have the surgery I could be dead within 6 years!  First, losing my eyesight to the cancer (basal cell, remember..this "simple to treat" cancer!), then the cancer could go up into my brain leaving me brain-dead...then...dead!  It seemed like a pretty clear-cut choice!  I was only 47 at the time...I saw myself living at least to 70...so I opted for the surgery! 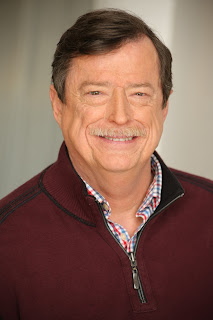 It's taken me awhile to re-adjust...socially it's been tough meeting people because I think they are looking at my nose...they are..but most can't pinpoint what's a bit odd.   Oh..and those glasses with the nose on them and a stache??  I grew a moustache to cover the flanges of the prosthesis and wore glasses to help cover...but after a bunch of years..I gave up the glasses as I felt I was hiding behind them (I wear contacts in my daily life) and I couldn't take them any longer..so I gave up the cosmetic glasses but I still have the stache..for now!  I don't care if they saw prosthesis lines on my face..it's a prosthesis..I kinda wanted people to realize this was my battle-scar...and I won the battle..(knock-wood!)...and, here I am!  A song I sing in my one-man show, "RISING ABOVE," is called "Into the Fire" from the musical "The Scarlet Pimpernel"--listen to the song...it tells of my battle.  It tells of any person's battle with cancer or any other challenge!  INTO THE FIRE!
<Part 3.....Music and Spirituality>

Visit my website for more about me and what's going on in my life!

Or, email me at: stevebluemusic@yahoo.com